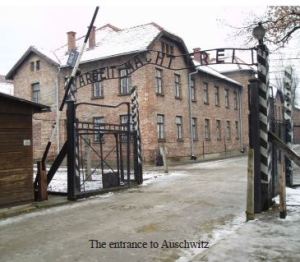 The shrill sound of the alarm pierced the still, dark night. The prisoners lay frozen, praying they would not be part of those chosen to be executed. According to the barbaric law of the camp, when an inmate escaped, ten men from his cell were chosen to starve to death, in the underground bunker. They rounded up all the prisoners and had them stand at attention, for three hours, in the prison yard. Then, they marched them in to have their meager supper, all that is but the men of block 14! Instead, they were forced to helplessly look by, as their rations were dumped into the canal.
The next day, they were lined up in the scorching sun, as the rest of the prisoners went off to work. They were given nothing to drink or eat. Their condition became so unbearable, many of them collapsed and not even the guards’ brutal beatings could arouse them. They just dumped them, one on top of another, in a heap.
As night approached, the rest of the prisoners came back. They, too, were lined up, facing those of block 14, so they could witness what happens when someone escapes. They stood there, helpless to ease the fear they saw in their fellow inmates eyes, as they stared across at them…And then, the dreaded announcement: “Since the fugitive has not been found, ten of you are condemned to death.” The commander Fritsch took delight as he passed back and forth, before the prisoners of block 14. He could read their minds, Oh God, don’t let it be me.

“Good-by, friends; we will meet again where there is justice,” was joined by another sobbing, “Long live Poland!” “Good-by! Good-by, my dear wife; good-by, my dear children, already orphans of your father,” cried out Sergeant Francis Gajowniczek.

{Watch video on the life of Saint Maxmilian Kolbe}
A prisoner from block 14 stepped out of the lineup. It was Father Maxmilian! He had been assigned to block 14, had endured all the torture and was still standing. He walked slowly and calmly toward the commandant. He stopped in front of Fritsch. The sight was blinding! There was a hush that went through the men lined up.

No one, in the history of the camp, had ever done anything like this before.
They stared; they tried to take their eyes away, but they couldn’t or wouldn’t. Suddenly they were not afraid of this man who reduced men to animals; he no longer posed a threat. The man before him, chest caved in, little more than hanging flesh on thin bones, had the upper hand. The commander was stunned, frozen. Was he afraid at what or who it was, he saw? Did he remember from a thousand lifetimes ago, his mother telling him about the Savior who gave His life for him?

( Visit our media page about Saint Maxmilian Kolbe)
Here was a man who had traded his God in for a lie and he looked frightened. Facing him, was one who death could have no victory over, one who dared to love Him with all his heart, mind and soul, totally abandoning himself to Him. He had loved others through Him, in Him, with Him, even this monster in front of him. This one who so exemplified the Sacrificial Lamb who died, forgiving them, saying “They know not what they do,” frightened him!
The commander found his voice; regaining his composure, he barked, “What does this Polish pig want?”

Father Maxmilian, pointing toward Sergeant Francis Gajowniczek, answered:
“I am a Polish Catholic priest; I am old; I want to take his place because he has a wife and children…”
Father Maxmilian was 47 years old!

This entry was posted on Thursday, August 13th, 2015 at 7:54 am and is filed under St. Maxmilian Kolbe. You can follow any responses to this entry through the RSS 2.0 feed. You can leave a response, or trackback from your own site.