“What hast thou, dust and ashes that thou canst glory!”

With these words, Our Lord called Sister Margaret Mary to humility, reminding her that she was His, and that renewed, more powerful devotion to His Sacred Heart was His will and His design, not hers; cautioning her, she was nothing; He is all! She was simply to say Yes! to Him and not become puffed up that He chose her for His will on earth. Are not His words to St. Margaret Mary, to us the Faithful as well, lest we think otherwise and fall? Did not St. Paul tell us that no one may boast; for we have faith, and are part of the Mystical Body of Christ by the Grace of God and His merciful Love.
Our Lord, the Potter, has molded us from clay, from the very beginning. No one has ever been exempt from the need of His Grace and Love. Was this not Our Lord’s way of telling her and us that only two were born holy, without the stain of original sin, Our Lord Jesus and His Mother Mary? Is He not reminding us that even the Saints, Visionaries, Mystics and Stigmatists were sinners, subject to Him and His laws? Is He not trying to teach us that they were just souls who fell in love with the Lord, simply brothers and sisters like us, only specially chosen by the Lord for a mission on earth? Are they not to be an example to us of what God can do with our Yes? The choice was theirs; they could have said Yes or No. Here is the story of a sinner who said Yes and became a Saint.
From her earliest years as a child, the Lord prepared this Mystic and future Saint for her mission, by molding her into the vessel necessary to carry out His commands. She wrote in obedience to her spiritual director the following words to her Savior:
“O my only love! How indebted I am to You for having predisposed1 me from my earliest childhood, by becoming the Master and Possessor of my heart, although You well knew how it (my heart) would resist You! As soon as I could know myself, You made my soul see the ugliness of sin, and impressed such horror of sin upon my heart, that the slightest stain caused me unbearable torment; and to put a stop to my childish impetuousness one needed only to tell me it was offending God. This stopped me short, and kept me from doing whatever I was eager to do.”

Margaret Mary consecrated herself to her Lord as His brid

e
Margaret Mary Alacoque was born in Charolles, a farming village bout twenty miles away from Paray-le-Monial, on July 25, 1647. Little did her family know when she was born, how powerfully the Lord would use her one day; nor did they have any idea that she was to be the instrument, He would use to bring about renewed2 devotion to His Sacred Heart, and the nine first Fridays.
Our little future Saint was baptized three days after she was born, in the little parish church of Charolles. Between the ages of four and eight, she spent much time at her godmother’s chateau. The saintly woman taught her the Faith, greatly influencing her future walk towards Jesus. At the age of four and a half, Margaret Mary made a vow of perpetual virginity in front of the statue of Our Lady in her godmother’s garden.
She later wrote:
“Without knowing what it was, I continually felt the need to say these words: ‘Oh my God, I consecrate my purity to You.’ Once, I said these words between the two elevations of the Holy Mass, which I usually attended on my bare knees, however cold it might be. I did not understand what I had done, or what the word ‘vow’ meant either, any more than what chastity meant. My only desire was to hide in some forest, and the only thing that held me back was the fear of finding people there.” 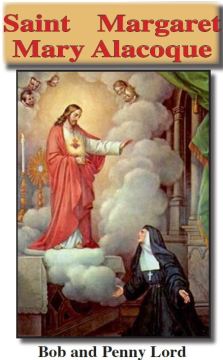 Friday May 30 is the Feast of the Sacred Heart of Jesus
The following article is an excerpt from the Chapter on St. Margaret Mary Alacoque and the Sacred Heart of Jesus from our book,
“Visionaries, Mystics and Stigmatists.”
Margaret Mary receives the First Great Revelation
When Our Lord spoke to Margaret Mary through “interior locutions,” He would bid her to ponder (as Mother Mary before her) on the Wound in His Side. Although all His Wounds brought deep sorrow to Margaret Mary, it was this Wound, this wounded Heart, pierced by Longinus’7 sword which caused her the greatest pain. I wonder if this was not the greatest Wound, the greatest hurt Our Lord suffered, not so much from the sword (as He was already dead) but the pain to His Heart through the rejection of His children. [It reminds us of the time, Our Lord appeared to John of the Woods in Bois Signeur Isaac, His Body covered with welts, bruises, and open bleeding cuts. “(His) Eyes pierced (Lord Isaac’s) eyes… Finally He spoke, “Look how they have mistreated Me.”8] When Our Lord Jesus showed His Precious Heart, pierced out of love for us, was He preparing Margaret Mary for His mandate: “Tell My children they can soothe My Wounded Heart, through renewed devotion to My Sacred Heart?” Although devotion to the Sacred Heart was not new to the Church, existing in some form or another, many Saints meditating on Our Lord’s Sacred Heart, the Lord chose Margaret Mary to promote this devotion in a way which would touch the hearts of all the faithful. He desired, it become an official devotion throughout His Church, throughout the world, for all time in memoriam.Up until this time Our Lord had made His will and presence known to Margaret Mary interiorly, but that was to change December 27, 1673. Margaret Mary was twenty-six years old. She had been professed for almost fourteen months. Her job in the Infirmary brought her nothing but rejection, insults and adversity. Her only solace was on her knees, her body pressed against the grill, as close to the Blessed Sacrament as she could get. She found herself enveloped by Our Lord’s heavenly presence. “He opened His Heart” to her “for the first time.” He said,“My Divine Heart so passionately loves all men and you in particular that, no longer able to contain the flame of its burning charity (love), it has to pour forth through you, and it must manifest itself to them, to enrich them with its precious treasures, which I am revealing to you, and which contains the sanctifying and salutary graces necessary to snatch them away from the abyss of perdition (sin). And I have chosen you as an abyss of unworthiness and ignorance for the fulfillment of this great plan, so that everything may be accomplished by Me alone.”“After that, He asked me to give Him my heart, which I begged Him to take, and this He did. He placed it within His own adorable Heart, in which He made me see my heart as a tiny atom being consumed in this flaming furnace, and then, drawing it out like an intense flame in the form of a heart, He put it back where he had taken it, saying to me: ‘Beloved, here is a precious pledge of My Love, which implants in your side a tiny spark of its most intense flames, so as to serve as your heart and consume you until the last moment;….its intensity will not die out or find refreshment except to a small degree in bloodletting,9 which I shall mark so completely with the Blood of My Cross,….it will bring you more humiliation and suffering than relief. That is why I want (you) to practice what is commanded of you by the rule, so as to give you the consolation of shedding your blood on the cross of humiliations. Although I have closed the wound in your side, you will feel the pain of it forever, and although you have taken only the name of My slave, I now call you the beloved disciple of My Sacred Heart.’”With this revelation of her future mission, Jesus made it plain to Margaret Mary that He had chosen her, but to save her from any slight possibility of pride in Him having chosen her, He revealed she was totally unworthy and ignorant. We hear again the message of Saint Bernadette when she said if the Blessed Mother could have found someone less worthy and more stupid, she would have chosen her instead of Bernadette.
For more information about St. Margaret Mary Alacoque and the Sacred Heart of Jesus click here