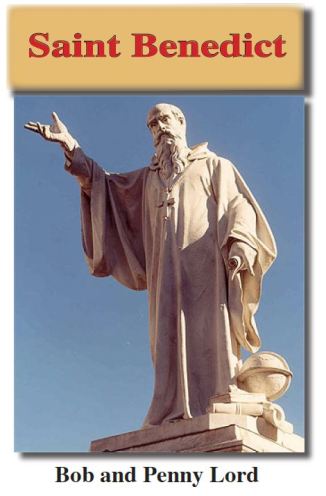 Rome of his day had become nothing but a barbaric cesspool, filled with pagan tribes, who had invaded her shores, spreading heresy and immoral behavior the likes of which was leading to a widespread depraved and decadent culture infecting all, but especially the intelligentsia, as usual the students.
As goes the world, sadly, often follows the Church. Poor Mother Church was reeling from the attacks within and without – with schisms threatening to tear down all that the Early Church Fathers had built. Immoral and amoral behavior soon became the accepted norm of the day with Christians accepting and adopting the culture of the hordes of heathens who had stormed their land. With permissiveness, war and rampant widespread plundering are sure to follow. There was not a ruler or king who was not either a pagan, or an atheist, or a heretic.
Benedict moves on
Holiness begets holiness, as well as sin begets sin. As sheep willingly follow a goat to slaughter, so it was with this scourge which covered society. It was such a deadly epidemic no one was exempt from its poisonous infection. The wholesale evil and totally immoral behavior of the parents soon cascaded down to the youth, who willing followed and consequently mimicked their example. By the grace of God, the young Benedict was repulsed by all the evil and scandalous behavior he could see permeating not only Rome, but the schools. Not prideful, and totally devoid of the brash opinion of youth, and society as well, that they can handle anything, Benedict made the decision to leave Rome. The only one he told was his nurse, who accompanied him.

The path was clear for him. Having completed all that higher education of his day could offer, he left behind his books; and rejecting all the trappings of the world, his parents’ wealth and comforts of home and estate, departed for a life centered in God. It is fairly certain Benedict left Rome at age twenty, as he was mature enough to discern the decadency and immorality of his friends and class mates.
First small step to a holy life
Benedict and his nurse made their way to Affile, a small town deep into the mountains, about thirty miles from Rome. There he would start a new life, with possibly others who desired a life centered in God. This was not to be. Try as he may, he soon realized he could not achieve here the closeness with God he so dearly desired. Leaving the temptations of Rome had not been enough. If he was to know God, he would have to lead a solitary life – away from the world.
The First Miracle
The anonymity he so desperately sought was not to be his in this small village, especially once he miraculously mended an earthenware vessel, which his nurse had borrowed and broken. He pleaded with her to not share the miraculous happenings. Did she comply? No! She went about the village broadcasting the miracle that had come about. The locals even put up a sign on the church, detailing the miracle and the young man who had brought it about. Enough said, that was to be the end of any possible inner peace and quiet meditative reflection he could hope for. The only way was to leave Affile and any friends he had made there, sympatico as they might have been. He found he could no longer have the comfort of having his pious nurse with him. He made the decision to make it alone, with only God as his Comfort and Shield.
New home – new beginnings – life as a hermit, at last.

Click tihis link to view short video – https://youtu.be/1GvVe9N144k
Now completely alone, Benedict scaled hills upon hills until he arrived at the shaggy, rocky rough-hewn mountains of Subiaco. (Till today, the mountains are steep and more than a little challenging to ascend.) At last, a hermitage where he could find some peace and solitude! But how? As God would have it, Benedict came upon a monk named Romanus. He poured his heart out to the monk, sharing his deep desire to live a hermit’s life. Although the monk lived in a monastery quite a distance away, he, without hesitating, dressed Benedict in sheepskins and escorted the youth to a cave in the mountains. Benedict desired to be alone. Well, here in this cave, removed from all civilization, he would know the quiet and solitary life, for which he so hungered. His cave, with its flat, sharp, jagged rock as a roof, made access to him from on top of the cave impossible. And should one attempt to approach the cave from below, the sharp climb to the cave was made hazardous by unscalable cliffs, thick brush, and a forest dense with trees obscuring it further.
Alone and solitary, prayer his loving companion, living this very austere life, his only human contact with anyone was the monk Romanus, who brought him a little sustenance each day. Benedict would recover it from a rope lowered down the steep slope by Romanus; upon which the monk placed a small ration of bread. Benedict was completely content. He had read about Anthony the Abbot and other Desert Fathers, and although he was still a young man, he desired this life more than anything on earth. His desert life went on for three years.

This entry was posted on Wednesday, July 11th, 2018 at 12:05 pm and is filed under Uncategorized. You can follow any responses to this entry through the RSS 2.0 feed. You can leave a response, or trackback from your own site.