Who is Saint John Mary Vianney?

Saint John Mary Vianney was a humble priest, hidden away in a small remote village, too small to appear on most maps of France.  This priest, like the mustard seed, could not be hidden in obscurity; the gifts of the Holy Spirit he received were to bring thousands and thousands to him.  It is no wonder he comes from that section where over a century later, the Charismatic Renewal of France began.  The Holy Spirit goes where He wills, when He wills.

It is also no coincidence, he was born close to where our Lord showed His Sacred Heart to Saint Margaret Mary Alacoque.  Jesus told Margaret Mary, He was more deeply hurt by the Crown of Thorns pressed on His Heart by His friends, than by the One His enemies mockingly placed on His Head.  How many times, Cure did your heart get pierced from a crown of thorns thrust there by friends?  Did it wound you, like it did Jesus?

Here again, like with Mother Mary’s Apparitions and Miracles of the Eucharist, we have clusters of Heavenly happenings.  Could it be, the Lord goes where there is much need?  You could definitely say that of Ars and of France, at the time of Saint John Vianney.  Ars was a village of sin and apathy.  The Cure would spend forty-one years of dry martyrdom, as Pastor of Ars, the only parish he would ever serve.

Saint John Vianney was born in France, the France of Heritage, eldest daughter of the Church.  This France, in his lifetime, would be ripped apart and aborted by revolution.  That malignancy of the spirit was not only to eat away at all the magnificent old traditions of France, but would spread right into the heart of the Church.  As anger cannot be contained, those spoiling and destroying did not stop at the aristocracy, but forgetting why they had begun in the first place, turned on Church, guillotining priests and Nuns.  We share this because, as in the time of Saint John Vianney, if faith, like a garden, is not cared for and nourished, it will die.  And die France did, and the Church along with her.  Only in places like French Canada and our beloved Louisiana can you see evidence of the glorious Heritage of the France of Yesterday.  There, the old traditions and pride in France and the Church flourish, side by side.

The Curé had many friends but he had enemies as well, who were always trying to discredit him. Those who loved him, wanted him to answer his accusers, to defend himself. In response, he told

this story, from the Sayings of the Desert Fathers:

“One day a Saint commanded one of his monks: `Go to the cemetery and say insulting things to the dead.’ The monk obeyed and when he returned the Saint commanded him: `What did they answer?’ `Nothing.’ `Well then return and praise them.’ The monk obeyed once more and came back. `Did they answer you this time?’ `Still nothing’ `Well then,’ answered the Saint, `whether people insult you or praise you, do the same as the dead.’”

Another time, making reference to the lukewarm, those who just go through the motions, mouthing prayers, attending Mass, distracted by the world and its attractions rather than centering on Him, without Whom there would be no world no less its beauty, he again used teachings from the Sayings of the Fathers:

“Flies do not settle on boiling water. They fall into cold or tepid water.”

He was warning: Unless when you are on fire: you continue to stoke up the fire with spiritual reading, attend Holy Mass daily,

receive the Sacrament of Penance often, fast, practice abstinence, make use of the crosses handed to you each day of your life; unless you become a contemplative in action making every thought, every action, every step, every beat of your heart in adoration of the Lord and His Sacred Wounds, you will become as tepid or cold as the stagnant water flies like to habitat.

Father Vianney was not one who lived in the past, the good old days. True, he was influenced by the lives of the Saints before him, using forms of their spirituality and wisdom to more closely portray Jesus Christ in our midst. But he was a man for all seasons. He tried to walk boldly in the footsteps of the Desert Fathers while accepting and using the available gifts of the Church of the nineteenth century.

These two spiritualities were closely fused into the man-priest that made up Father John Mary Vianney: one from the ancients and the other from the Church of his day. He loved this Church on the move. He revered this Church which stood on the foundation of centuries of faithfulness and martyrdom. Right from his days in the Seminary and with Father Balley, strength was formed within him which would last and sustain him throughout his entire priesthood. He had Jesus as the center of his life and the Blessed Mother as his mother and intercessor.

From the spirituality of Saint Sulpice, he developed an acute awareness of his Lord in the Holy Eucharist. From this 7th century Saint, he learned, the one perfect Adorer of His Father was Jesus, the Eternal priest, in the Eucharist. 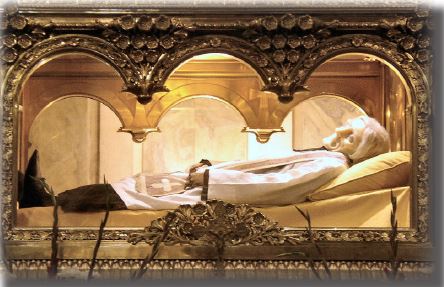 He could feel his Savior’s presence in the Tabernacle, so he took every opportunity to adore Him in the Blessed Sacrament. His Presence brought tears to the Curé’s eyes. This passion he felt for the Lord was no on-again off-again affair. Speaking of the Lord in the Holy Eucharist, he said:

“If we had a lively faith, we would certainly be able to see Him in the Blessed Sacrament. There are priests who see Him every day during the Holy Sacrifice of the Mass.”

Many who saw the Curé during the Mass, believed he was speaking of himself as one of those priests, but the Curé would never have admitted that, never wanting attention brought to himself. He would have considered this consolation. He not only did not seek consolation, he distrusted it:

“When we have no consolations, we serve God

for God’s own sake. When we have them, we are in danger of serving Him for ourselves.”

This entry was posted on Wednesday, August 3rd, 2016 at 9:57 am and is filed under Uncategorized. You can follow any responses to this entry through the RSS 2.0 feed. You can leave a response, or trackback from your own site.