What is the most important thing to be a Catholic today? by Bob Lord

What is the most important thing to be a Catholic today?

Family, since we appeared on EWTN’S Bookmark recently, we’ve been getting a lot of questions about what we’re supposed to believe in today.  There’s a lot of confusion in our Church today.  Our priests are bewildered; our Bishops are no less perplexed.  Misinformation is coming our way daily, probably from the main stream media.  Nevertheless it puts us everyday rank and file Catholics in a quandary.

There is only one thing we need to focus our lives on, and that is Jesus in the Eucharist.  He comes to us in the Holy Mass.  The greatest prayer we have is the Mass.  All the promises Jesus made to us are confirmed in that one great prayer which too many of us take for granted.

Well, when you’re confounded by what you’re hearing that the Pope has said, or what Cardinal is resigning due to a scandal, or what priest is running a drug operation in his home town, just focus on what it is that makes you a Catholic.  It’s Jesus in the Eucharist; Jesus in the Tabernacle; Jesus in your life.

I want to tell you a story.  My precious wife Penny and I were invited to the installation of an Archbishop.  He was a good friend of ours, as was his mother and most of his family.  So when we got there, we were treated like royalty as long as we were with the family.   We got front row seats at the various events that week.  We got the first taxis, making priests and monsignors and bishops wait.  It was great.  We were scheduled to sit with the family at a table right next to all the hierarchy after the installation.

SO, the day of the Installation arrived.  We had great seats in this huge auditorium.  We were sitting with the family.  Down on the stage area, two Cardinals were in attendance.  Then about 50 high hats (Bishops) processed in.  They were followed by close to 250 priests.  It was a glorious celebration.

About then, the cousin of our friend the Archbishop-to-be became upset.  She looked at the program where the new Archbishop made what we thought was a very loving statement to our Protestant brothers and sisters who might be there, telling them they could not receive Communion, as they were not in union with the Catholic Church.  The cousin, an ex-nun, turned to Penny and said, “Isn’t that a disgrace what he’s written here?  We’ll never get them back to the Church.”  Whereupon my darling, in her best Brooklyn accent volleyed back, “What’s your problem?  It’s in keeping with Church teaching.”  At that point, the cousin’s mother, the aunt of the future Archbishop, spouted out, “Oh what’s the big deal?  It’s only a symbol anyway.”

There was a moment of silence before Penny, filled with her Italian rage let the two of them have it.  She said:

“Do you see those two Cardinals down there?

Do you see all those high hats (bishops)?

Do you see all those priests down there?

Well they could all get up and dance naked on the altar and I would still be a Catholic because JESUS IS NOT A SYMBOL.  He is present to us in the Eucharist every day.” 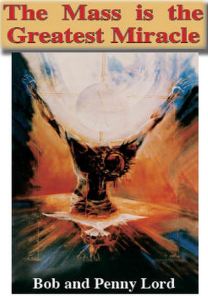 She silently said to Jesus “I wish You had not made me say that.  You know where we’re going to sit at the dinner.”  And her prediction was true.  Instead of sitting with the family, right next to all the bigwigs of the Church, we found ourselves right next to the kitchen door, getting banged every time it opened and closed.

You may think the moral of this is “No good deed goes unpunished.”  I don’t think so.  I believe the moral is that our Faith belief is very simple.  It’s not complicated at all.  It may not be easy; but it’s simple.  Focus on the tabernacle.  You have a friend there, a best friend.  Talk to Him; He will listen.  Don’t let outside forces influence you.  And that goes for my revered priests,  bishops and Cardinals.  Keep your eyes on Jesus in the Eucharist.  I didn’t say it would be easy.  But it is simple 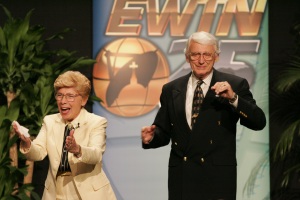 IMAGE LICENSED TO EWTN FOR PROMOTIONAL, TV, AND EDITORIAL USE (Photo by Greg Tarczynski)

Information about Miracles of the Eucharist

This entry was posted on Wednesday, August 19th, 2015 at 2:13 pm and is filed under Miracles of the Eucharist. You can follow any responses to this entry through the RSS 2.0 feed. You can leave a response, or trackback from your own site.

3 Responses to What is the most important thing to be a Catholic today? by Bob Lord